Independence Avenue, Avenue of Independence or Avenue de l’Indépendance, is an approximately 1-kilometre double lane in the centre of Antananarivo stretching between the central fruit, vegetable and meat market and the Soarano Train Station - the capital's central train station. 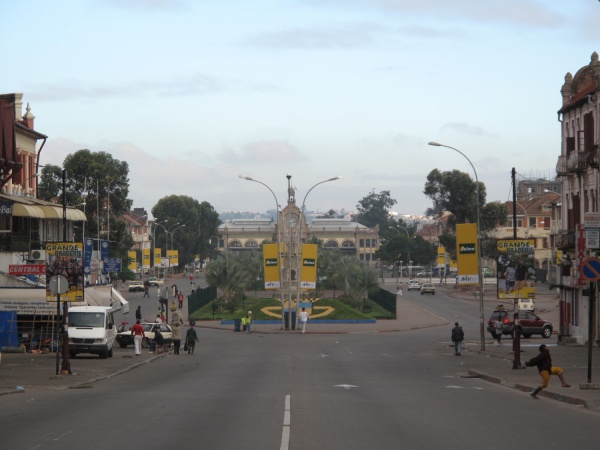 It was during the colonial period that the lower part of Antananarivo was modernised and endowed with a wide roadway, originally named Avenue Fallières, then Avenue de la Liberation, finally becoming the Avenue de l'Independence. At one end is the Soarano railway station, built between 1908 and 1910, and at the other is Ambohijatovo, where the equestrian statue of General Gallieni was removed after independence and replaced by a memorial to the victims of the tragic events of 1947. The arcaded buildings, terraces and pergolas that line the avenue date from 1935.

The Town Hall, opened on March 7, 1936, still gives its stamp to this avenue and also its liveliness because it was a busy location: Indeed all the municipal services were found there (the registrar of births, marriages and deaths, the hygiene office and city security), making it a familiar place for the population of Antananarivo. Destroyed by fire during the events of 1972, this building was replaced five years ago, which is more than thirty years later, by a new building, clearly reminiscent of the attractive characteristics of the previous Town Hall.