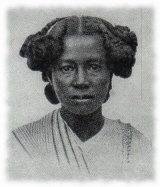 Sakalava - People of the long valleys - is a coastal tribe of approximately 700,000 people living in the western part of Madagascar between Nosy-Be, Mahajanga and Toliara. Although only just over 6% of Madagascar's population are Sakalavaian, their territories are still the largest of all Malagasy ethnic groups. The Sakalava once comprised an ancient empire, ruled by their own kings and queens. They are moreso a diverse ethnic group than an ethnic group in its own right. The Sakalava dialect distinguishes them from other ethnic groups in Madagascar.

The Sakalava are cattle raisers. Prosperity is meassured by the number of cattle owned. It is quite common that the Sakalava living in the inner country keep large herds of zebu cattle that outnumber the human population. Compared to women of other tribes the Sakalava women have a higher social status in their community.

Ancestor worship is practised in form of ceremonial communication with the dead in trance (tromba) and the celebration of the washing of the relics (fitampoha).