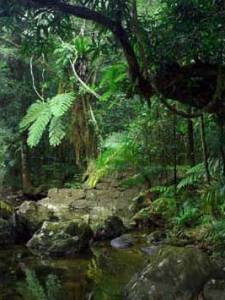 It is with great sadness that we report the temporary closure of Marojejy National Park to tourism. The closure was deemed necessary by park management due to the lawlessness that has descended over the SAVA region during this time of political unrest in Madagascar, and the resultant looting and destruction which is currently occurring within the park. In particular, gangs of armed men (led primarily by foreign profiteers in conjunction with the rich local mafia) are plundering the rainforests of Marojejy for the extremely valuable rosewood that grows there.

The crisis in Marojejy has serious implications on several fronts. First, of course, is the extremely detrimental impact it is having on the park's unique flora and fauna. While old-growth rosewood trees may be the primary objective of the armed gangs, such destructive, unregulated use of the forest will certainly have an adverse effect on everything else in the park. Most worrisome is the well-being of the highly endangered Silky Sifaka, a lemur found only in the rainforests of Marojejy and the surrounding area.

But the crisis is also having a devastating effect outside the boundaries of the park itself. With armed militia descending on local villages and death threats being issued, people live in fear; communities are divided, and families are pitted one against the other. Many local people who depend on tourism – guides, porters, shopkeepers, hotel and restaurant personnel – now live in limbo. With no other means of support, some turn to the lucrative rosewood trade.

Your support for conservation in Madagascar is more important than ever during this period of turmoil. While you might not be able to visit some of these beautiful areas right now, we hope you will not forget them, and that you will continue to work for their preservation. We will keep you informed of changes in the local situation as we learn of them.