Some of the worlds finest cacao grows in the Sambirano region in northern Madagascar. Between 4,000 and 5,000 tons of dry, quality cocoa are produced yearly in the area. Nearly 80% of the harvest are cultivated by independent farmers.

Issouf lives with his family in Antanambao, a small village in the Sambirano Valley, about 47km south of Ambanja. As a boy he learned everything about cacao farming from his father, who had a plantation behind the village just next to the Ambahatra river. A big flood in 2004 and 2005 devastated about 600ha of cacao farmland in the area, including his father's plantation. Heavy rainfall caused erosion and washed sand from the mountains into the valley. The otherwise good, fertile soil was covered by sand and is since then unusable for farming purposes.

In 2009, Issouf created a new plantation further away from the village. Beside already existing older cacao trees he planted new trees in the shade of fruit trees next to coffee shrubs, banana trees and vanilla. On his plantation all three types of cacao grow: Criollo, Forastero and Trinitario.

Issouf is the President of the ADAPS cooperation in the Antanambao region. The Association pour le Dévelopment de l'Agriculture et du Paysannat du Sambirano (Association for the Development of Agriculture and the Peasantry of Sambirano) buys dry beans from independent farmers for a fixed, fair price. Like all members of ADAPS, Issouf cultivate and process the cocoa according to strict regulations to ensure a high quality crop. 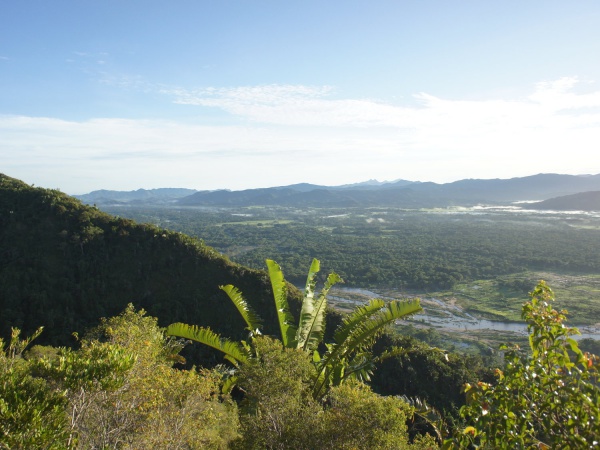 In the Sambirano region cacao grows all year round with two peak seasons for harvesting - in June, July and October, November. Depending on the season, Issouf goes daily or twice a week together with his wife and children to his plantation to harvest ripe cacao pods. Most fruits grow directly on the stem, others on branches. For harvesting Issouf uses a special harvesting machete with a round peak, similar to a hook. He has to be very careful when harvesting the pods. The ripe fruits must be cut minimum 5mm from the stem not to damage the floral button, from which a new flower will grow. Thereafter he and his family open the pods and separate the wet beans from the shell. The wet beans are thereafter brought to a fermenting and drying station.

There are no fertilizers used on Issouf's plantation and all his cacao is 100% naturally organic.

Behind Issouf's house he has a small tree nursery, where he cherishes not only new cocoa trees but also fast-growing trees. Together with other villagers he plants the fast-growing trees on the mountain slopes to prevent future erosion which could otherwise destroy his plantations again. For Issouf, like many other self-sufficient farmers in the region, cacao is an indispensable cash crop to sustain and improve the living standards of their communities.