Farankaraina Tropical Park, or Parc Tropical de Farankaraina, is located on the Masoala peninsula in Antongil Bay, in the north east of Madagascar. The park covers an area of 1,650ha forest and is home to the Aye-aye, Madagascar's rarest lemur species.

The humid tropical Farankaraina forest is located 15 kilometres east of Maroantsetra. The park area consists of an old forestry station (150ha) and 1,500ha forest. In 2006 the Ministry of Environment passed the management of the park over to Antongil Conservation, a NGO set up by South Lakes Wild Animal Park (UK), The Wildlife Protection Foundation (UK) and Zoo de Doué (France). The goal of Antongil Conservation is to preserve the rich nature of the forest, develop ecotourism and to create alternative farming methods and income for the villagers. 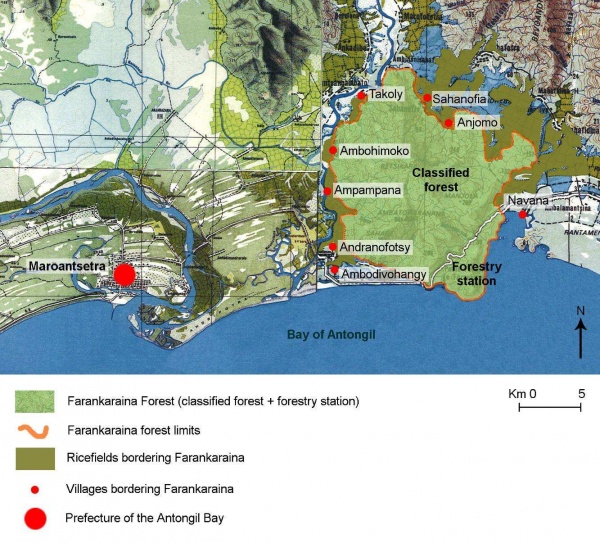 In 2007 park wardens began patrolling the area to protect the forest from illegal wood-cuttings, hunting or clearing land for rice cultivation. In 2008 an ecotourism camp was opened in the plain of the forest station and three tent-shelters built of local materials were made available to visitors. In 2009 inventories began documenting the flora and fauna of the park. The conservation program includes a rehabilitation centre where rescued lemurs, chameleons and birds are taken care of and released back into the forest. Villages bordering the forest are increasingly involved in the management of the park. The annual Lemurs Festival with dance and drawing contests, traditional music attracts hundreds of villagers from the surrounding areas and exhibitions help demonstrate the links between the man and nature.

The entrance fee to the park is 5,000 Ariary (about 2 Euros) per person. Antongil Conservation has set up four tracks for visitors to explore the nature of the park. Track A (4.1km) leads from the encampment to Vohilingoza's Beach. Track B (2km) follows the Farankaraina River in the north-east direction. Track C (1.2km) also follows the Farankaraina River, but on the other side and towards the north. Track D (1.5km) starts as Track C and continues direction east.