In 1895 a simple metal tower was constructed on a square concrete base. Later this tower was reconstructed into a brick-built 14-metre high octagonal tower. A Sautter-Harle mechanism ensures the rotation of the lens. The focal plane is 47 metres. At an interval of 15 seconds three white flashes stream up to 14 metres. In 2009 the lighthouse was completely renovated and is now powered by solar panels.

The caretaker Mr Bemitambo lives with his family in one of the rooms in the adjacent building. Mr Bemitambo is very passionate about his work and enjoys to explain to visitors who are interested the technology as well as takes them up the lighthouse. A spiral staircase leads up to the top where it is possible to walk around the lighthouse on a narrow view platform. There is a magnificent 360° view onto the passage of the Diego Suarez Bay, Emerald Sea, the Indian Ocean and the hinterlands of northern Madagascar. 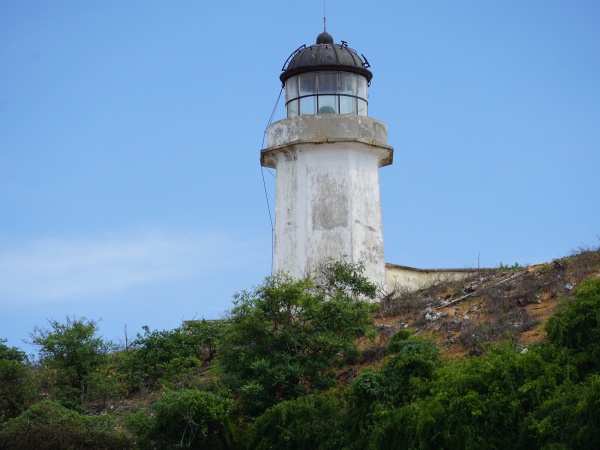 Close to the lighthouse are some canons and other remains of defense constructions as well as the beautiful Baie des Dunes and Baie des Pigeons.

Another, much smaller lighthouse can be found northwest of Cap Miné, located just offshore ORANGEA beach. This lighthouse has a focal plane of 11 metres and streams a continuous red light. The octagonal concrete tower is 11 metres high.