Morondava is a picture-postcard town in the Menabe region in south west Madagascar. In former times Morondava was a centre of the Sakalava Kingdom and a popular stop-over for sailors. Today the area is rich in sugar and rice farming, while remaining a popular stop-over in particular for tourists travelling to and from Tsingy de Bemaraha National Park. 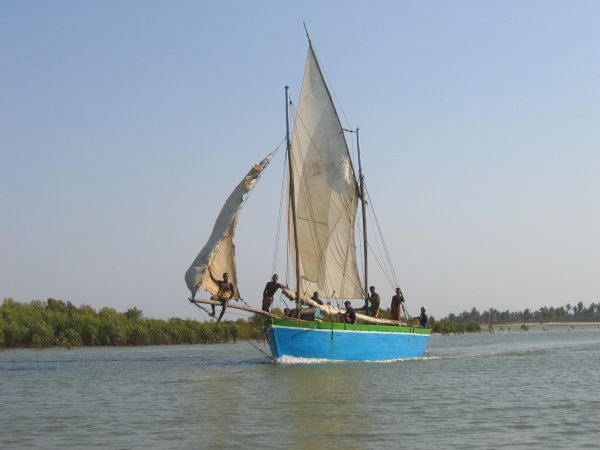 As the population has grown in the region the forests have also been gradually cut down, except the baobab trees which the locals has preserved for religious reasons. However, unfortunately deforestation to make way for sugar cane plantations continues in large areas including some of the remaining baobabs.

Morondava can be reached by a 700km drive from Antanarivo. However, the road conditions in the latter part of the journey, the 120km between Miandrivazo and Malaimbandy, are especially poor and can take six hours. The entire drive can take between 11 and 18 hours. As such, Morondava is best reached by plane. There are daily flights by Air Madagascar connecting Antanarivo and Tulear.

About 12km from town enroute Baobab Avenue is Parc Menabe, a small zoo including a couple of lemurs, a crocodile, various chameleons and a collection of green Malagasy lovebirds. Additionally, this is an ostrich farm set up by a South African expat who brought the ostriches to Madagascar. As such, Morondava may be the only place in Madagascar where ostrich meat can be found on restaurant menus. Update March 2010: As a likely result of a downturn in tourism, this nice zoo along with the ostrich farm appears to have closed. However, the animals are still roaming around the park area and are being fed by by zoo a keeper.

Morondava offers plenty of accommodation alternatives, ranging from budget backpacker rooms to comfortable beach bungalows. The hotels are either in the town or on Nosy Kely peninsula, a few minutes walk from the town centre.