Difference between revisions of "Antambahoaka" 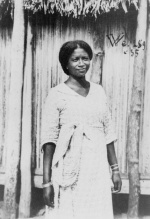 Antambahoaka literally means Those of the people. With a population of 0.4% they are the smallest tribe in Madagascar. They live around Mananjary south of the Betsimisaraka territory on the southeast coast of Madagascar.

The Antambahoaka are of Arabian origin and are mainly Moslems. They are descendants of Raminia Rabevahoaka, a king who came from Mecca to Madagascar around the early 14th century. The Antambahoaka served the courts of kings throughout Madagascar with their deep knowledge in astrology and medicine.

Every seven years a large group circumcision is carried out in Mananjary. They use a kibory (communal burial house) to bury the deceased.