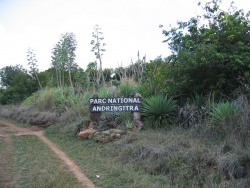 Andringitra in south-central Madagascar was declared a national park in 1999 and has been managed by WWF since 1993.

The park covers an area of 31,160 hectars characterised by mountains, including Pic Boby, which at 2,658 metres is Madagascar's highest accessible peak.

Andringitra is an important central link in the longest unbroken chain of remaining rainforest in Madagascar, stretching some 180 kilometres from Ranomafana National Park in the north to Peak Ivohibe in the south.

The park is divided into three ecosystems: low altitude rainforest, montane highland forest and high altitude vegetation. Climates range between humid and tropical in the eastern lowland rainforests to extreme cold temperatures at higher elevations, which can descend to -8°C.

Andringitra has possibly the highest biodiversity of any park in Madagascar. A complex mixture of lifestyles, methods of cultivation and lifestock raising has left its mark on the landscapes. Much of the humid lowland forests surrounding the park have been cleared for farming methods, such as paddy rice cultivation and slash-and-burn agriculture.